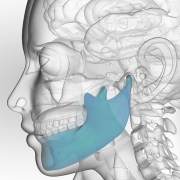 – Dysmorphosis: shape anomaly.
– Maxillo-mandibular: pertaining to the mandible and maxilla.
– Mandible bone of the lower jaw.
– Jaw: even and symmetrical bone, there is a maxillary left and right bones. Together they form the upper jaw.
– Dysfunctions: functional disorders.
– dental occlusion: so the dental arches that have to be nested one inside the other when the jaws are tightened.
-Airway retro-basi-lingual: part of the upper airway behind the tongue base.
– OSA: Obstructive sleep apnea.

The structure of the adult face is dependent on several factors. One is heredity. Our gene pool from our parents, it makes sense to look like them a minimum. The second factor comes from the stimulation of bone growth nuclei of face soft tissue including muscle. The language placement, lips, how d & rsquo; swallowing and breathing pattern will have during growth a significant impact on the development of bone structures. Sometimes leading to abnormalities in the shape and size of the bony structures of the face (dysmorphoses). Examples of functional disorders leading to deformities

There are several types of deformities that often s & rsquo; combine them. They are often diagnosed first by the dentist and the orthodontist because they generally result in a misalignment of the dental arches relative to the other. It could be :

– abnormalities of relations between the jaws. With two jaw too far forward in relation to the & rsquo; other and the rest of the face. Generating such prognatie or retrognatie.

– facial length abnormality. The face may be too long or too short it results in appearance too fine or too large otherwise face.

– Fault smile. The bony elements of the face are covered by the facial soft tissues. A positioning defect of bone structures by reports to soft tissue can result in several abnormalities smile. This can be important with gingival appearance and sometimes unsightly gum. Or rather the smile can be "toothless" with insufficient uncovering teeth.

– chin abnormality. The front part of the lower jaw which supports the soft tissues of the chin and lower lip may be too much or not enough developed. This can cause a bad position of the lower lip with consequences for teeth and gums.

– facial asymmetry. Sometimes there are imbalances between the left and right sides of the face can be aesthetically annoying if significant.

These various deformities require precise diagnosis and a comprehensive multidisciplinary assessment (attending dentist, orthodontist, maxillofacial surgeon, Speech Therapist, physiotherapist). The goal is to diagnose faults and their causes in order to minimize the risk of recurrence after the treatment performed. Furthermore it is important to review any related conditions: poor dental status, Obstructive sleep apnea, snoring, temporomandibular dysfunction and bruxism. Their ignorance can be detrimental to the success of the treatment and its outcome.

The balance sheet includes an interview and clinical examination oriented structural defects but also functional abnormalities of the face. Casts of dental arches and study models are necessary to appreciate the size and shape of the dental arches and teeth placement. Imaging tests are also needed to explore the bone structure of the face.

If deformities are diagnosed during growth can sometimes be corrected by an orthopedic treatment by an orthodontist. However once growth over osseous abnormalities of the face remain and if they are important, it is necessary to resort to surgery to correct.

Conversely teeth move throughout life. It is for this reason that in the vast majority of cases when surgical correction of deformities is envisaged the use of orthodontic treatment is essential. Furthermore teeth are also subject to the above-mentioned functional problems and therefore they must be corrected on pain of teeth move again even after surgery and orthodontics.

From a general point of view the medico-surgical treatment sequence is as follows: an orthodontic phase, then the correction of deformities surgery followed by another orthodontic phase and finally the surgical removal of the material that had been implanted during the first intervention. Meanwhile it may be necessary to carry out monitoring by a speech therapist and a physical therapist or to support dysfunctions.

The entire management is often long (2 years in general) and multidisciplinary, revolving around the patient trio, orthodontist and maxillofacial surgeon. The harmony and understanding among all of them is essential for good results and patient satisfaction.

Orthognathic surgery is to correct maxillofacial deformities by changing the bone structure of the face. The overall goal is to place the dental arches in good position while integrating these movements in the overall structure of the face. Although this surgery has often important aesthetic impact its essence is to be functional in particular by standardizing the dental articulation. Surgery is very standardized, it consists in detaching the rest of the bone structure of the face the problem item, to replace it in a good position and then fix it using mini plates and screws mini. Several actions can be performed during the same intervention and that based on the diagnosed dysmorphoses.

They correct the lower jaw. Several movements of bone structures are possible (this list is not exhaustive).

It advances the upper jaw relative to the rest of the face and involves: a chin projection, expanding the corners of the jaw, increased Neck mentonière distance and effect "lifting" in retendant soft tissues of the lower third of the face. The mandibular advancement also increases airway caliber retro basi-lingual which can be useful in case of obstructive sleep apnea syndrome whose origin is precisely a narrowing of this anatomical area.

This movement has the opposite effects of mandibular advancement and therefore we must be very careful in this case regarding a possible obstructive sleep apnea syndrome.

It fixes the upper jaw. Several movements of bone structures are possible (this list is not exhaustive).

It advances the upper jaw relative to the rest of the face and causes: a filling of nasolabial folds, a widening of the nasal wings and effect "lifting" in retendant soft tissues of the middle third of the face. The maxillary advancement tightens the soft palate which may be useful in cases of sleep apnea obstructive (OSA) whose origin is too long or too flabby and sailing.

It increases the transverse diameter of the upper jaw and causes: a fuller smile, a widening of the nasal wings, increased language resting volume allow better positioning it. Moreover maxillary expansion tightens the soft palate with the consequences that were mentioned above in case of OSA. Moreover, this intervention can improve nasal breathing by widening the base of the nasal cavity and pear-shaped holes.

It aims to reduce the height of the middle third of the face. This fixes a gummy smile and close the nasolabial angle.

This is the inverse movement of the impaction with opposite effects. This will discover the smile when it does not show enough teeth.

It is entirely possible to achieve at the same time operative act on the upper jaw and an act on the lower jaw. They may also be associated, always at the same intervention, to genioplasty for correcting the chin, a septoplasty in case of disorder of the nasal septum, to turbinoplasty if the inferior turbinates require and finally to the avulsion of wisdom teeth

Osteotomy Sagittal Mandibular
Scroll up
We use cookies to ensure you the best experience on our website. If you continue to use this site, we will assume you are satisfied.Ok