You are here : Home / Interventions / cutaneous surgery of the face / Excision of skin lesions 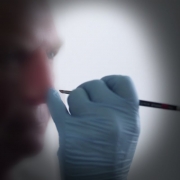 Excision is the medical term for action to surgically remove a part of the body.

Excision of skin lesion: Tumors (or lesions) are skin spots or skin growths, size, of various shapes and color. They may be located on the entire face or of the body. Each cell type contained in the skin is able to transform into benign or malignant tumor; there exists a large number of skin tumors, from simple "mole" in very rare tumor.
Regarding skin tumors, there are three cases leading to their removal:

Some initially benign lesions (as some "moles") can sometimes transform and evolve to malignancy; so it makes sense to take them preventively. Other purely benign lesions can be removed because they are annoying, either because of friction or irritation, either for aesthetic reasons.

the visual inspection of a lesion is not always possible to affirm its benign or malignant. In that case, surgical removal will aim to submit a lesion histology (microscopic) which alone will be able to confirm the diagnosis.

Skin cancers are, of course, be removed because surgery is often the only treatment to achieve complete healing. The goal is therefore to remove them completely, by providing a "margin of safety", that is to say, passing off, on the sides and the bottom, to give themselves every chance of avoiding a recurrence.

Which was removed will be systematically subjected to histological analysis (under a microscope) to confirm the diagnosis and to corroborate the fact that the lesion has been removed in whole.

here are the 3 of the most common malignant skin tumors.

Basal cell carcinomas are the most common cancers. They usually occur in people with white skin, on average after 45 years. Their main risk factor is sun exposure. They touch the face and neck in more than 80% cases. Their evolution is purely local, without metastasis, but overlooked changes can result in significant mutilation especially when the tumor is located near the eyes, of the nose, mouth or ears.

Melanoma: malignant melanoma is much less common than previous tumors. It occurs most often on fair skin and sun exposure is a major risk factor. It can be in the form of a black pigmented lesion of recent onset occurring on healthy skin. It can also occur on a "mole" pre-existing. All parts of the body can be affected. When melanoma is confirmed, Treatment is surgical and involves removing the lesion with wide enough safety margins. The search for a systematic lymph node involvement will. Depending on the initial thickness of the melanoma and lymph node status, further treatment may be offered (lymphadenectomy, chemotherapy, immunotherapy).

This act can be performed under local or general anesthesia. It depends on the lesion (depth size), the planned reconstruction and patient choice.

The excision of a cutaneous tumor, whether small or large, is primarily a surgical procedure that requires compliance with certain principles.

Surgical excision should remove comprehensively lesion often with healthy skin safety margins. Histological analysis of the injury is systematic because only this examination to confirm the Benin or malignant lesion. This analysis allows in some cases to assess the aggressiveness of the tumor. When dealing with a large lesion or poorly located or if malignancy is uncertain, your surgeon may need to perform a biopsy to identify the lesion. Indeed, surgical technique and reconstruction processes may be different depending on the type of injury. Depending on the size and location of the tumor, there are several methods to repair the defect.

Once an incision through the dermis that is to say the deeper part of the skin, the surgery will leave behind a scar, certainly, will go on decreasing, becoming more or less discreet, but never totally invisible.

The basic principle is the removal "in time" followed by direct suture approximation of banks. The integration of the area to be removed in a time is essential to avoid the formation of folds at the ends of the scar when closing, but results in a scar whose size is greater than the diameter of the initial lesion. On this subject, be aware that if most often, the scar is greater than the initial injury, is that to extend a scar reduces the tension exerted on each of its banks and so have long term the best cosmetic result. 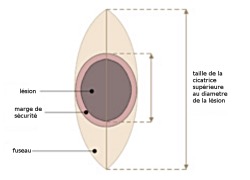 In cases where the size of the lesion or its location make impossible a closure by direct suture, coverage area removed will be provided by either a skin graft from another region, or by a local plasty which corresponds to the displacement of a flap of skin surrounding so that it comes to cover the loss of cutaneous substance.

The scar of this type of flap is much greater safe, more, the term cosmetic results, however, are often better than those of a transplant.
Furthermore, the discretion of the scar will be favored by the orientation of the incision in the axis of the natural folds of the skin.
No makeup and no jewelry or piercings shall be worn during operation.

One can possibly find some discomfort with a feeling of tension on the scar, but actual disabling pain are rare. The first few days it will avoid "force" on the scar. Caution should be exercised vis-à-vis movements too would seek the operating area.

In the hours following the intervention, a small seepage of blood (red) or lymph (yellow) may possibly come lightly stain the dressing. In the 48 early hours, the operated area can sometimes reveal edema (swelling) sometimes very important in the face and small bruises (blue) which are only transitory.

Itching is fairly common during the healing phase. All these findings are disturbing and should be considered as suites "usual".

Care provided by a registered nurse are to perform after surgery. They help clean and disinfect the scar. More expertise in terms of healing nurses will allow you to alert your surgeon early in case of complications suspected.

On advice of your surgeon, it is sometimes possible to shower or wet the surgical site while healing is not yet fully achieved, it must then be very gentle with the scar and carefully dry it and redo the dressing to the & rsquo; immediately after drying.

The sons, when they are not resorbable, withdrew from the 8 th and 15 th day.

Massaging the scar should be started 15 days after healing and conducted several times a day. It allows & rsquo; soften the scar and reduce skin adhesions deep plane. Sometimes it is necessary to use physical therapist.

It is not recommended to expose the scar to the sun for 1 an, it could change its appearance and make it even more visible.

It is advisable to be accompanied for output and for the first night after surgery. Most of the time, it is desirable to provide after surgery a few days off work.

Alcohol and tobacco should be avoided before and after intervention. Alcohol is incompatible with most drugs against pain. Tobacco decreases healing, increases postoperative pain and increases the risk of infection.

For procedures with a skin peeling, smoking can cause severe skin complications. In this context, it is recommended a complete stop smoking at least a month before surgery and wound up (generally 15 days after the procedure).

A post operative follow up consultation is essential, it lets you know the results of the histological analysis and ensure the proper development of postoperative.

A normal scar is pink and thick while 3 months and s & rsquo; gradually fades in 1 at 2 years. A period of several months (sometimes up to one to two years) is required to appreciate the final appearance of the scar. We must understand that the healing remains a random phenomenon whose quality can not be guaranteed. Indeed, the quality of healing varies widely by age, body parts, environmental factors, and a patient to another.

To help in the aftermath of this type of intervention you will find useful advice in the category Site advice https://docteurwajszczak.fr

The occurrence of an unsightly scar, however, must be submitted to your surgeon as it may lead to consider the use of certain therapeutic measures.

After ablation of a malignant skin lesions, pathological microscopic examination can sometimes conclude that the safety margin at the periphery was insufficient and that the lesion, whose boundaries are sometimes very vague and difficult to precisely determine with the naked eye, therefore might have not been removed completely or with a sufficient safety margin. Revision surgery to remove any remaining tumor or to spend more away from the old injury then most essential time.

Although the removal of a lesion was deemed complete, including pathological examination, can sometimes help, even years after, a "recurrence" local lesion. This is explained by the fact that some lesions are "multifocal", ie they present several development buds, some may be minimal, not detectable during the first intervention, and not contiguous to the main lesion. They can therefore be spared initially and then develop their own account.

Any medical procedure, very well led, harbors a risk of complications. Do not hesitate to contact the surgical team that took care of you, or clinical emergencies or contact 15 in case of serious emergency.

Fortunately, the significant risks and complications are rare after cutaneous surgery procedure. for all that, and despite their rarity, you must be informed (e) the possible complications:

small bleeding They can even occur a few days after surgery. They are usually easy to control.

hematoma : Mostly harmless, they can justify being surgically removed if they are too large.

Infections : It is manifested by intense pain and local redness with purulent discharge. The use of antibiotics or simple local health allows, most of the time, solve the problem, sometimes with adverse consequences on the quality of the scar.

Dropping suture : It is more common in smokers. It is treated with local care but will delay the evolution. It can cause a widening of the scar, often less forward than was originally thought.

necrosis He is a mortification of the skin blood supply failure. It is exceptional and occurs only in cases of extreme tension on the banks of the scar or when making a flap to the precarious vascularization. It can sometimes complicate a hematoma or infection. It is clearly favored by smoking. It seriously compromises the aesthetic result.

Failure of engraftment : The success of a transplant is never certain in 100%. We can sometimes attend necrosis, most of the partial time, graft.

Injury to nearby nerves : Usually these are the sensory nerve nets that are concerned, then leading to localized sensitivity disorders (anesthesia, tingling…). Exceptionally, it may be a driving arm, resulting in a paralysis of the affected part of the face (for example half of the front). Fortunately most of the time these disorders are transient and disappear spontaneously within weeks.

In total, should not overstate the risks, but just be aware that surgery, even seemingly simple, still a small share of hazards.

lesion excision oral soft tissue
Scroll up
We use cookies to ensure you the best experience on our website. If you continue to use this site, we will assume you are satisfied.Ok