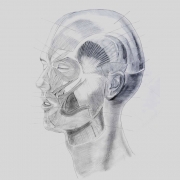 – osteotomy : Medical term for action to cut the bone.
– sagittal refers to the section plane corresponding to a plane parallel to the patient profile.
– mandibular refers to bone that is cut ie the mandible. This is the bone of the lower jaw.
– TMJ : Joint pair and symmetrical. It allows movement of the mandible. There are two, one on each side.

This procedure is performed under general anesthesia. Excluding pre-operative complication there is no skin scar, since the entirety of surgical approaches is made in the mouth.
After incised mucosal, the ascending branches of the mandible are cut in order to disengage the toothed portion of the mandible of the temporomandibular joints. Two osteotomies are made, one on each side.
In osteotomies special attention is held regarding the inferior alveolar nerve which passes the cutting plane. It is a sensory nerve that collects sensitive information chin halves, of the lower lip and the lower dental arch.
The toothed portion is positioned in the cephalometric analysis of the patient and according to the desired dental occlusion. Then the bone fragments are joined by mini plates and screws mini. The surgical approaches are sutured with absorbable son.

Elastic orthodontic can be set up to help the patient get used to his new dental articulation. They do not prevent opening the mouth or eating. Mostly they hang on orthodontic appliance. If it does not allow, transmucosal screws will be used for this purpose.

Changing the position of the mandible allows reuse is open jaws relative to the other. The facial appearance is thereby necessarily changed and we must have realized before considering this type of intervention.

Mini plates are invisible after the procedure because they are in contact with the bone and covered by mucous. They can stabilize the displaced bone fragment in the desired position. However it is not as strong as the natural bone and therefore it is desirable not to force it as the bone has healed. A soft diet for 6 week and no activity is risk of trauma to the jaw during 3 months are required after surgery.

This type of surgery usually requires hospitalization rule 3 at 5 days.

Swelling of the face can be very important, it is maximal at 48 hours of the intervention and gradually fades in 2 at 3 weeks. Why a downtime and work stoppage during this period are advised.
The pain in the operated areas often gives with analgesics and disappears in a few days.
ice packs coated with a cloth (not directly on the skin) decrease swelling and pain.
Often small bleeding persists for a few days & rsquo; Intervention. The treatment consists of mouthwash in ice water and apply a compress on the area that is bleeding and bite very gently on it until the bleeding does s & rsquo; not stop.
Despite all the attention paid to it the inferior alveolar nerve mentioned above is very often traumatized during surgery which is not reflected by pain but by insensitivity of the territories that are under its control.

The sensitivity returns spontaneously within months.

The son of sutures are absorbable and fall alone from 15 days. A very soft surgical toothbrush is required to clean and avoid becoming irritating due to the presence of plaque.
Good oral hygiene is essential for the healing is done without complication. After each meal, teeth and gums should be cleaned by brushing. mouthwash are prescribed in addition to brushing.

Food should not be hard for the 6 weeks after surgery otherwise bend or loosen mini plates. Besides eating hard foods on surgical approaches is painful and promotes infections. Specifically: During the 2 first days, the diet should be soft, warm or cold. Then during the 12 days Avoid very salty or very acidic foods.
Also avoid offensive foods: biscuits, toast, chips ... Also avoid very small items that could come between the dots and create infections semolina, peanuts, rice, peas ... And finally continue for 4 weeks with a soft diet for a total ensure the healing bone ongoing lack of food trauma 6 weeks. You will find on the site https://docteurwajszczak.fr in the section advice recipe ideas suited to you after this type of surgery.

Tobacco is avoided in the aftermath of the intervention, it decreases the mucosa and bone healing, promotes infection and increases the post operative pain. Alcohol is not compatible with the medications prescribed after surgery and is also prohibited.

Mini mini plates and screws implanted to stabilize the bone fragments can be palpable and become annoying. This is why it is advisable to remove once the bone healed (between 6 months 1 an). This procedure is done under general anesthesia but also it is an act much lighter than that caused their poses and performed most often in outpatient.

If elastic tie down bolts were put, it will be removed in consultation with 3 weeks of intervention. And generally setting the elastic is done 15 days of the intervention by the orthodontist.
Several consultations checks are carried out in the aftermath of the intervention by both the maxillofacial surgeon by the orthodontist. They help ensure the proper development of postoperative.
Post-operative orders are given most of the time before surgery. This will fetch the post operative medication before surgery and have it available directly on the day of the release of the clinic.

Any medical procedure, very well led, harbors a risk of complications. Do not hesitate to contact the surgical team that took care of you, or clinical emergencies or contact 15 in case of serious emergency.

There may be rare complications:

The stitches all fall alone and mucous general rule is already healed. But if they fall prematurely or if the lining does not heal the surgical approach may reopen. If this disunity points causes a small opening it heal spontaneously but the take some time. However if disunity is important it will be necessary to put points.
An infection of the soft tissues of the cheek (cellulitis) can occur days or even 2 at 3 weeks after surgery. It is consecutive to the stagnation of food residue in the surgical. It gives a suitable antibiotic treatment, exceptionally it may be necessary to carry out surgery to drain an abscess if cellulite is complicated.
A hematoma can occur in the operating suites. If it is small it will resolve spontaneously, however it is important it will be necessary to evacuate surgically.
If there is a fragility of temporomandibular joint intervention can decompensate it and cause a limited mouth opening, pains, and joint crunches. In the vast majority of cases everything is in order in a few weeks.

The alveolar nerve can be injured or cut significantly during the intervention. This can cause a definite anesthesia halves of the dental arch, of the lower lip and chin corresponding thereto. Moreover this same nerve in cases of significant injury can heal a painful fashion.
In the mandible bone intervention can break as inappropriate journey, mini mounting plates can be used to repair the fracture and this may require the completion of skin around with the consequences that could result namely skin scar and at worst damage facial nerves engines.
Delay or absence of bone healing: very rare, it requires to carry out a new intervention sometimes with bone graft.
Trauma occurring on mini plates while the bone is not well healed may twist, loosen or break. It is then necessary to replace these plates and is done under general anesthesia.
bone healing jaw out of position: when it comes to small shifts, the treatment may simply be to reposition the jaw in a good position with elastic chin, gesture that will eventually be strengthened by the targeted teeth grinding. If travel is important, reoperation may be necessary.

In total, should not overstate the risks, but just be aware that surgery, even seemingly simple, still a small share of hazards.

It is very important to bring the day of the procedure: the plaster study models, All radiographs: dental panoramic, teleradiographs craniofacial front and profile and the scanner if it had been prescribed a. Without these intervention can not be performed

Surgery of the jaws (orthognathic)

WITHOUT THE DOUGH QUICHES
Scroll up
We use cookies to ensure you the best experience on our website. If you continue to use this site, we will assume you are satisfied.Ok