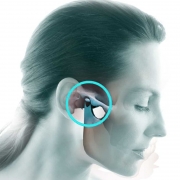 Temporomandibular dysfunction (DTM) account after the origins of dental pain the most common cause of orofacial pain.

In an international harmonization worries, it is now called temporomandibular dysfunction.

A temporomandibular dysfunction (DTM) is defined as a disorder mandibular
dysfunctional, expression of myopathy and or joint or the masticatory system.

DTMs have joint forms, muscle forms and are often
combined musculo-articular. The diagnosis of DTM is defined by the presence of at least one of these three signs:

– Loud noises in the temporomandibular joint in the jaw movements (slam, crackling or crackling).

– abnormal mandibular kinematic: limitation, deviation or deflection of the normal movements of the mandible.

Review, based on 6 cohort studies from 5 pays, showed that pain in the temporomandibular region affected 11.3% of women and 6.5% men. Swedish epidemiological data confirmed the prevalence: 12.7% among women and 6.7% at men's.

To understand this disease, it is necessary to have some anatomy notions of the area in question. It is generally of the upper and lower jaws, joints that allow the movements of the lower jaw relative to the upper one and muscles that actuate these same movements.

They unite the mandible to the temporal bones, they are even and symmetrical. They allow the movement of the mandible relative to the maxillary bones.

And there's the lateral pterygoid who have a complex and essential role in the. they own 2 beams and fit especially on the articular disc.

Over time these contractions "useless" from a functional point of view of sound adversely on the joints, muscles and teeth.

the dental articulation disorders can in some cases lead to stresses in the temporomandibular joints and implement positioning reflex patterns mandibular joint and muscle stress in becoming pathological term. An example might be closer to this phenomenon is that of a wobbly chair whose structure is weakened if subjected to repeated stresses.

The long-term evolution of the DTM is random. The symptoms can be stabilized and regress with appropriate treatment; Ideally also is to control the causes which is not always possible.

drug treatments are largely symptomatic, they do not treat the cause. These painkillers, anti-inflammatory and muscle relaxants.

This treatment is very effective when bruxism is causing DTM. Treatment is chewing on the partial paralysis of the muscles with botulinum toxin. This toxin is injected transcutaneously at masticatory muscles.

In most cases the injected muscles are: the temporal and masseter. These injections depending on the dose used to significantly reduce the strength of these muscles. This does not remove the muscle contractions but significantly decreases the intensity which reduces the effects of bruxism

There are several types of gutter can be useful in the DTM, however it is not recommended for use in the long term. Using a dentist to correct the dental articulation disorder may be appropriate in some cases.

The need for surgery in the DTM is exceptional. It is conceivable only in very special cases, particularly if there are disturbing and significant abnormalities of bone relationship between the jaws.

We may request that cookies be set on your device. We use cookies to let us know when you visit our websites, how you interact with us, to enrich your user experience, and to personalize your relationship with our website.

Click on the different headings of the category to find out more. You can also change some of your preferences. Note that blocking certain types of cookies may affect your experience on our websites and the services we are able to offer..

These cookies are strictly necessary to provide you with services available through our website and to use some of its features.

Because these cookies are strictly necessary to deliver the website, refuseing them will have impact how our site functions. You always can block or delete cookies by changing your browser settings and force blocking all cookies on this website. But this will always prompt you to accept/refuse cookies when revisiting our site.

We fully respect if you want to refuse cookies but to avoid asking you again and again kindly allow us to store a cookie for that. You are free to opt out any time or opt in for other cookies to get a better experience. If you refuse cookies we will remove all set cookies in our domain.

We provide you with a list of stored cookies on your computer in our domain so you can check what we stored. Due to security reasons we are not able to show or modify cookies from other domains. You can check these in your browser security settings.

We also use different external services like Google Webfonts, Google Maps, and external Video providers. Since these providers may collect personal data like your IP address we allow you to block them here. Please be aware that this might heavily reduce the functionality and appearance of our site. Changes will take effect once you reload the page.